Wasabi Stories vol.84: “Losing something in exchange for convenience”

“Losing something in exchange for convenience”

The story was about “abacus”, which is the first thing that comes up to his mind as his memento. 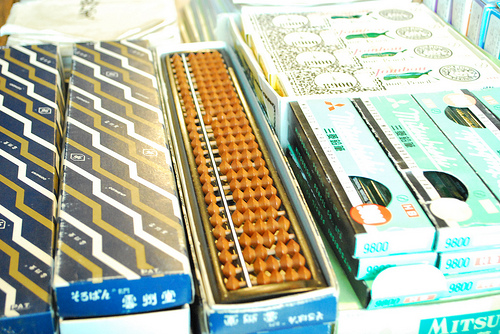 He first started learning abacus when he was in elementary school.

Although he didn’t get high rank, it was the most useful skill to him.

He entered TOTO in 1970, when [W:Japan World Exposition] was held in Osaka, and Japan’s economy was picking up in the “post-war economic miracle”.

Assigned at the budget department, he used to discuss all day with the board members, but sometimes they couldn’t come to a conclusion, and furthermore, he was told “the numbers have changed” and had to correct them till morning.

Kise said “Today, we can do it instantly by ‘Excel’. But we used abacuses 40 years ago. There are various detailed headings like sales volume, cost and profitability. Since the company consists of autonomous divisions, I had to calculate them by each division and product. Calculating interest rate was really tough.”

Struggling at the budget department, he couldn’t get any day off for half a year; his eye sight got poor and he started wearing glasses.

After calculators spread, his work got quite soft, but Kise doesn’t think of the golden age of calculators and pc so positively.

“Now I feel ‘there is something missing in the change’. By using calculator and pc, you can’t really understand the true meaning of a number. By thinking in your head, you gain knowledge. I have resigned from the president position but I want to tell this to the young members of the staff.”