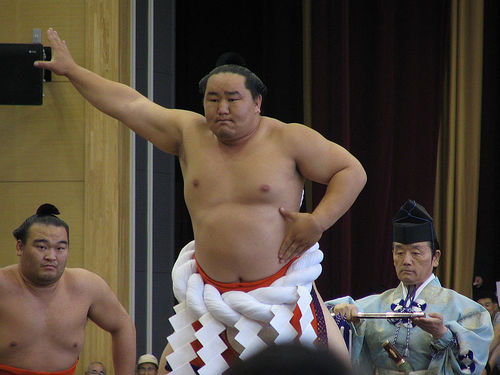 Why was such unique hairstyle common in old times in Japan?

According to Pola Research Institute of Beauty & Culture, there are various theories on the origin of Chonmage hairstyle. The most reasonable theory is that the hairstyle derives from hondamage, which is a hairstyle spread among samurai under Honda Tadakatsu, a Japanese general and later a daimyo. The hondamage was especially popular from 1772 to 1781, and there were eight variations worn accordingly ranks and fashion.

As well as the hairstyle itself, the word “chonmage” sounds humorous too. It is a combination of two words, chon and mage, and chonmage used to be a name of folded hair that thin-haired old man wore because it looks like a kanji character “chon” (see the image below). Since Meiji period (1868-1912) when men wore short hair, they called all folded hairstyle, chonmage.

Folded hairstyle is found in art crafts made in Kofun period (Tumulus period) (250-538), so chonmage was not so strange, and it was just another type of folded hair at that time. Not only samurai but tradesmen and artisans also wore the hairstyle.