[One Year On: Japan after Quake] Easing the Burden of Recovery 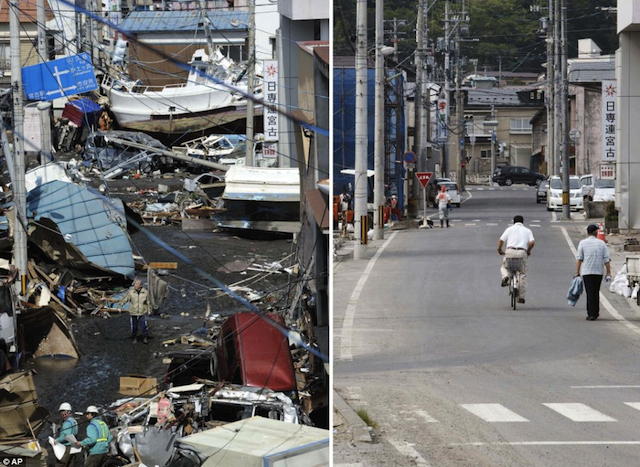 For more photos >> “Photos: Japan – Nearly One Year After Deadly Tsunami” from denverpost.com

One year from 3.11, and we often see a lot of before/after photos like the one above. Those photos show Japan’s amazing restoration. The process of rebuilding is supported through a variety of sources; individuals, companies, and other countries.

Each person did the best they could. Most people donated money, and a lot of people went to the disaster stricken areas to lend a hand. The total amount of donation through the Japanese Red Cross at the point of March 7, 2012 is ¥310,381,573,008 (US$3,803,439,388). The amount looks extraordinary, but this reflects only what has been donated through Japanese Red Cross Much more money must have been donated through other organizations. (http://www.jrc.or.jp/contribution/l3/Vcms3_00002096.html)

And the total number of volunteer workers who visited Tohoku’s three prefectures (Miyagi/ Fukushima/ Iwate) from Mar. 2011 – Feb. 2012 is 936,800. This is the number of officially registered workers, and there certainly have been more unofficial volunteers.  (http://www.saigaivc.com/ボランティア活動者数の推移/) 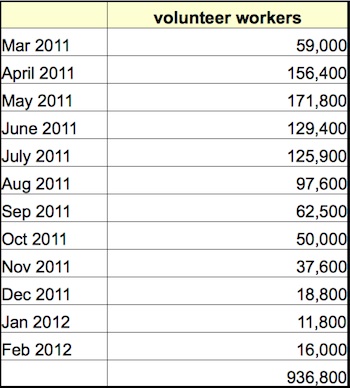 The number of volunteer workers is decreasing as Japan moves more and more toward normalcy, but still there are many people supporting Tohoku in various ways.

Here is the link to an article titled ‘Adult quake victims volunteer for younger peers’ from Mainichi Daily News. Please do take a look.

For a prime example of company-based support, I would like to share the story of Yamato Transport. Yamato is one of the biggest transportation companies in Japan. There are many branches in the Tohoku region, too. 6% of those branches were damaged, and around 100 Yamato vehicles were rendered useless. They couldn’t confirm many employees’ safety. Under such a horrible situation, some Yamato members living in Tohoku voluntary started to transport relief goods gathered at evacuation sites. “Service first. Benefit later.” This is Yamato’s motto.

Makoto Kigawa, the president of Yamato Holdings, was moved when he heard this story, and he quickly decided to form relief supply transportation teams. 16 days after the disaster he visited Tohoku and saw the terrible situation. There was nothing for 360 degrees surrounding the site of Yamato’s Rikuzen-Tanaka branch. The devastation was complete and Kigawa was at a loss for words. On the other hand, he was moved again when he saw victims were positively and vigorously acting. After visiting Tohoku, he came up with the idea of a 10 yen donation for every parcel. Kigawa says, “We intend to make the use of these funds, which would total 13 billion yen based on our delivery results for fiscal 2010, fully transparent.

First, funds will be used for the reconstruction of the local infrastructure utilized by everyone affected by this disaster, such as hospitals, schools and preschools. Second, funds will be used to revitalize fisheries and agriculture, two major industries of the areas. This assistance is also meant to show our gratitude to these industries which have helped to drive the growth of the Yamato Group over the years.”

Here is the Yamato Group’s philosophy and vision relating to the support for Tohoku.   http://www.yamatosolutions.com/english/message/president-kigawa.html

IT companies are also strongly supporting Japan’s recovery.  Let me share a story of an iPad app called ‘Ubiregi’ (yubi-reji). 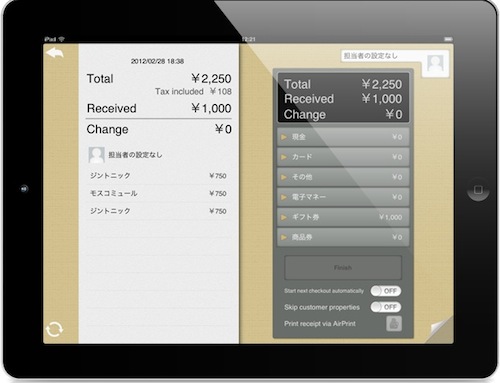 ‘Ubiregi’ is an iPad app providing a service similar to that of a POS (Point of Sales System). There is no initial fee, and the monthly payment is only ¥5,000 (US$61). This low cost system can send the data of sales and centrally manage it.

An ‘izakaya’ restaurant in Ofunato city was hit by the tsunami. Their POS divice was swept away, but the loan for the POS device was still not forgiven. The difficult situation they were facing was not taken into account by their leasing company, and the izakaya restaurant is still making their loan payment for their lost device.  If they bought a new POS device, they would suffer under double debt. Enter the makers of Ubiregi. The company quickly decided to support commerce in the disaster stricken areas, and started providing free Ubiregi service from May 1, 2011. Perhaps there are more technology solutions possible for easing the burden or tsunami recovery.

Japan is sure recovering. However, there is also the fact (http://news.yahoo.com/japan-clears-only-5-tsunami-rubble-140957596.html) that as of yet Japan has cleared up only 5% of tsunami rubble. We have fears of the next big earthquake. Radiation issues are being prolonged and seem endless.We are still struggling in the aftermath of  3.11. But now we are wiser and more conscious, and more attention is being given to disaster measures which can be shared with other earthquake-prone nations around the world.