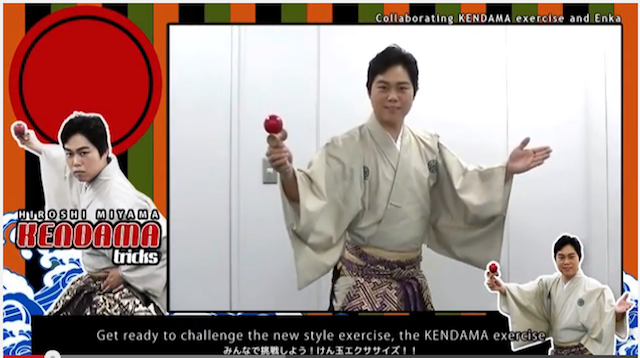 Enka is a genre of Japanese music. Enka has characteristic melody lines and is sung with a distinctive vocal tremolo expression/vibrato called kobushi.  One enka singer, Hiroshi Miyama, has been lately attracting attention for his unique singing style. He shows off his kendama, Japanese cup-and-ball skills during the interlude of his new song. Back in February, Miyama unveiled this kendama performance for the fist time at a promotional event held in Tokyo, and it created a small sensation! It’s getting more and more difficult to sell CDs these days. However, Miyama’s new song has hit an impressive 80,00 sales mark, which is very unusual in the enka music business.

As the next promotional strategy taking advantage of his kendama skills, Mitsuyama created a kendama exercise video! For those who can’t imagine kendama exercise, here is the video posted on Youtube. It’s kind of funny that he is playing kendama in a traditional kimono with a very serious look 🙂

His kendama skills are magnificent, and the technique you can see around 1:37 in the video is super amazing! But I would say there are not many people who can practice his exercise in the same way as he does in the video. We all might have to learn the right way to hold a kendama first…lol