He spoke his thoughts on the issue that “Today’s world of efficiency priority makes harder for incompetent people to live.”

Chiba says “in my manga, I don’t write about an excellent wonder boy. I have written clumsy inconspicuous young boys who strive hard.”

For example, one of his representative manga series “Notari Matsutaro” is about a young guy who is inexperienced in sumo wrestling strives to be in Makuuchi, the top division of professional sumo.

It’s about a troubled young man who meets boxing and strains for victory. 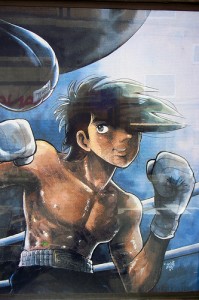 The main character Yabuki is a desperado who was wandering through the Tokyo slum but such young guy crawls up to fight on the ring of the world boxing championship.

There are actually naturally talented people, and they are great but Chiba says it’s more moving to see a man in shadow struggles and reaches the top rather than a talented person.

That is why he didn’t make Yabuki to be the world champion in the manga.

“I wanted the readers to see the process more than the result. The attitude of climbing up step by step from the bottom where it’s no light is refreshing. My manga are praise of human.”