Those who are starving before meal, let me appologise in advance because I’ll write about tasty food _(_^_)_

Today, I would like to introduce an article about ozoni, a traditional New Year’s soup, which can be seasoned very differently, depending on region.

Alongside Osechi dish, a soup called Ozoni is an essential Japanese food for the Near Year.   According to the article, ozoni was originally eaten to pray for good harvest and family’s safety of the New Year.  There are still arguments but the most widely accepted theory believes that the ozoni is originated in food of the Muromachi period.  So it has almost 700 years of history.  I’m a bit surprised as it was longer than I expected (+o+)

Now, let me explain little bit about variety of ozoni with some images. 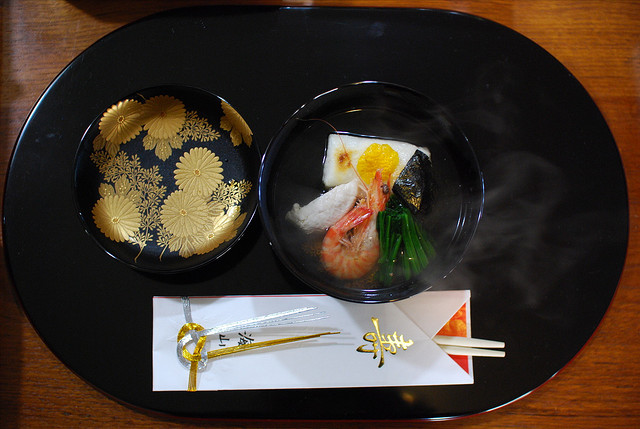 This is the soy sauce-based ozoni soup with a pre-baked square rice cake, which is widely eaten in Kanto, Koshin’etsu and Tohoku regions.  Yellow bits on the rice cake must be yuzu zest?  I feel like I can smell a nice citrus scent rising out of the cup now～ 😛 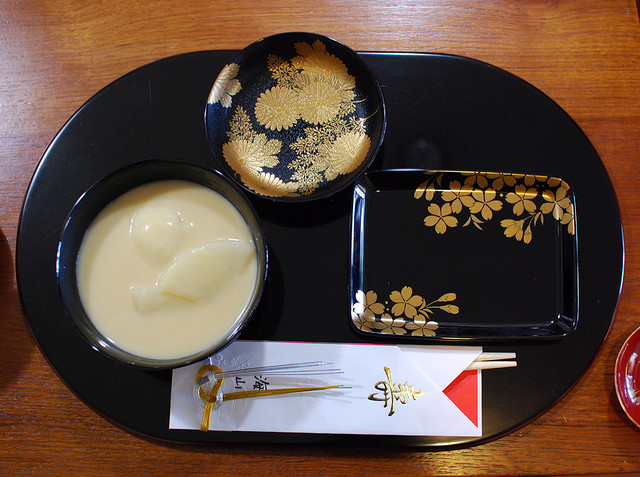 Next one looks completely different from the first one; white miso based ozoni soup.  This white ozoni is often seen in Kinki region, and typically has round rice cake without pre-baking. 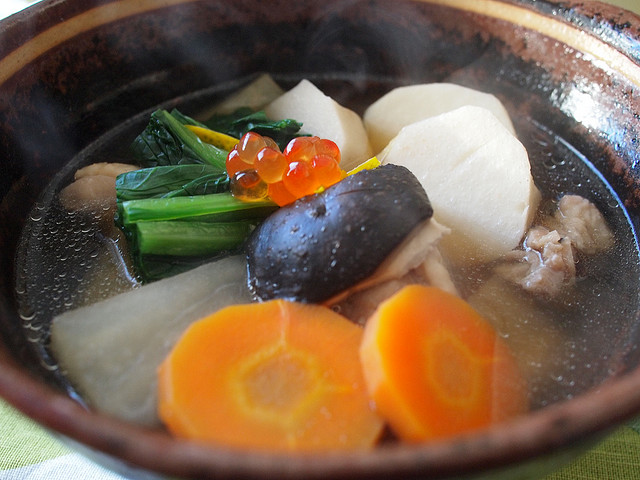 This ozoni looks gorgeous with many vegetables plus salmon roe on top!  Looking at oil floating on the surface of the soup, I assume meat used for this ozoni must be duck??

Colour of soup differentiates their looking, but difference in ingredients also makes big difference, doesn’t it?

According to the article, ozoni used to be a cuisine to offer to a god, and gradually became popular as a lucky food among the upper-class including the nobles and samurai in the Muromachi period.  In the Genroku period, it spread among ordinary people, too.

Since the dish used to be an offerings to a god, ingredients for ozoni tends to be the finest ones of the regions, and this is the reason why ozoni looks different, depending on the region.

As for my family, my parents are from different prefectures, so we enjoy two different ozoni each year in order like this year in the way of father’s hometown, and next year in mother’s way to avoid unnecessary conflict.  Personally speaking, I don’t mind whichever as both of them are tasty anyway Lol

I hope you enjoyed today’s article about ozoni.

Any national food, which can be cooked in a different way, depending on area??  Please let me know!