It is a view of Sendai city in Miyagi Prefecture. Although it is the largest city in the Tohoku region (northeast Japan), there are a lot of greens; therefore, it is called by its nick name “City of Trees.” 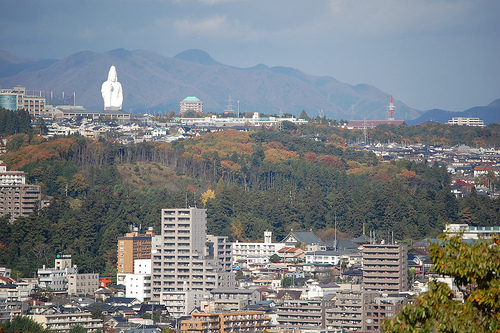 You can see a white statue in the far left. That is Sendai Daikannon, a large statue of the Goddess of Mercy. The 100-meter-tall statue really stands out against the greens and the clustered buildings.

The entrance is dragon’s month.

Kannon is holding a wishing stone in the right hand and a water jug in the left hand.

What a peaceful face…

There are 12 floors inside and visitors can take an elevator to go the upper floors where they can see the great view of the city and the Pacific Ocean through observation windows.

According to several reviews, it is unprosperous as a tourist site, but if you are tired of going crowded tourist sites, why not try this one?

There is Best Western Hotel Sendai right next to the statue! It will be convenient for the hotel guests because they will never get lost. Wherever they go, just approach the statue and the hotel is right there!

And another good thing to know is that the statue is facing the Sendai Station, the center area of the city, so if you ever visit Sendai and get lost, look at the statue, and at least you’ll know which way is the center.