The most lively spot in Tokyo now is the [W:Tokyo Sky Tree].

It is now under construction. When completed, it will have a height of 634 meters, and become one of the leading radio towers in the world.

The construction of the tower will be completed by December 2011. It is now at 398 meters, and will be twice as tall as Tokyo Tower which is 332 meters!

The Sky Tree has already become a popular place to visit, and many people from all over the country came to see the tree. It is often talked about on TV shows.

Since I live in Tokyo, I thought I shouldn’t miss a chance, so I went to see the tree. 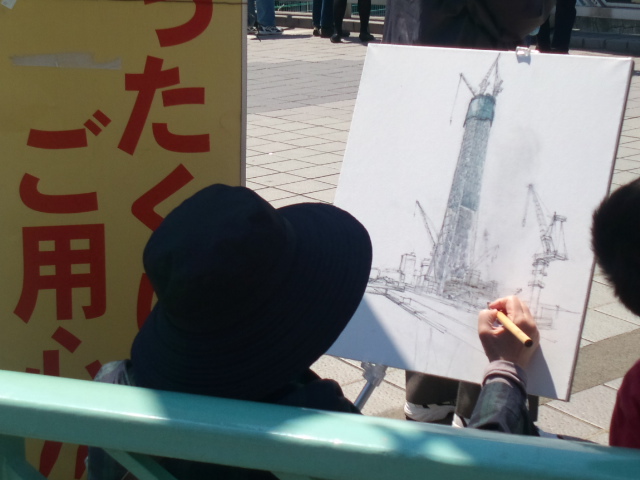 In the past post about the Tokyo Sky Tree, I have already written the basic information about it. Here, I am going to share the stories behind the tower that I learned from TV.

Because Japan has never experienced that height, there are some difficulties in the construction. The builders are facing problems that they have never faced before.

Their biggest enemy is “wind,” which shakes an iron pole while they are lifting it to the top by cranes. Since it is very windy up there, it is a very dangerous task. Even they can lift the pole, wind turns the pole’s position and gives them hard time to insert it into a frame. They had had endless trouble until they got a new invention.

To solve the problem, they employed a new adjuster (if my memory is correct, it is called “Sky Adjuster”) which fixes the angle of the pole. This adjuster was invented specially for Sky Tree.

They attach a box shaped device and an iron pole on a rope, and the adjuster fix the pole so that it can be lifted higher without yielding an inch by wind

More amazingly, the adjuster can subtly change angles by remote control. It makes easier to layout the poles on top of the tower.

When I saw it on TV, I was really impressed. It was also a moment that I got proud of Japan inventing such technology.

Why do they have to build ridiculously high tower? Besides to attract a great deal of attention, there is a serious reason for it.

Today’s Tokyo is crowded with every sort of buildings, and low buildings can barely get a radio wave from Tokyo Tower; therefore, they had no choice but to build a tower twice as tall as the old one.

I didn’t know that…

The last story is about an old man who lives in front of Sky Tree.

This old man’ life had been boring since he retired from work, but the construction of the tower changed his life.

He looks how the construction makes progress through field glasses everyday as adaily routine. Through the glasses, he remembered the constructers’ faces and names, and he enjoys it LOL.

Another fun he is having is lotteries. He numbers them “398” every time he buys. The number is, of course, the height of the current Sky Tree. He hasn’t won with the number but he believes he will (^_^).

Many people are excited to see Sky Tree to be completed. I hope everything goes well and have a beautiful new tower here in Tokyo.