Stars on a River “The Legend of Osaka Amanogawa” 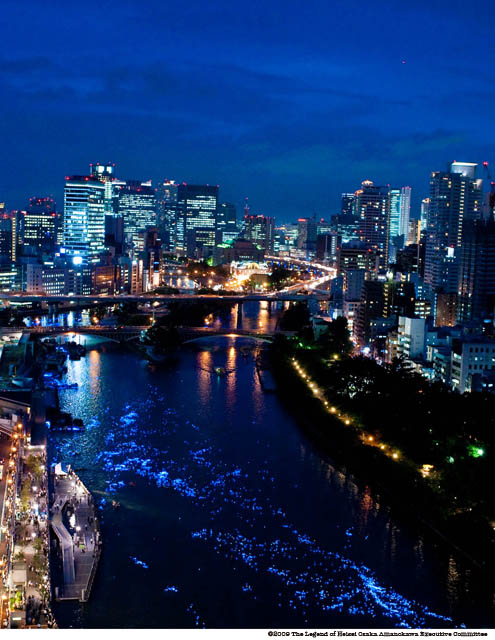 (C)Heisei the Legend of Osaka Amanogawa 2010

On July 7, the star festival day, “Heisei the Legend of Osaka Amanogawa2010” was held in Osaka, and 50,000 blue lights floated on the Okawa River.

The total number of 27,000 people visited the site and enjoyed the one-night-only Milky Way on the river.

The light is called “inori-boshi (prayer star)” and it is a blue LED in a plastic capsule with a battery. After 7 pm, local children released the stars from boats.

This is how it looks from above. (Mute the volume if you the noise bother you.)

“Heisei the Legend of Osaka Amanogawa” is a kick off event for the Osaka Castle Summer Festival, and held “to encourage Osaka, to cultivate the hearts to be nice to others, and to appreciate rivers and water resource”.

The capsules were all collected after the event finished.

According to the official website, they experimentally released the capsules last year, and this year is officially the opening year, and they hope to hold it annually.