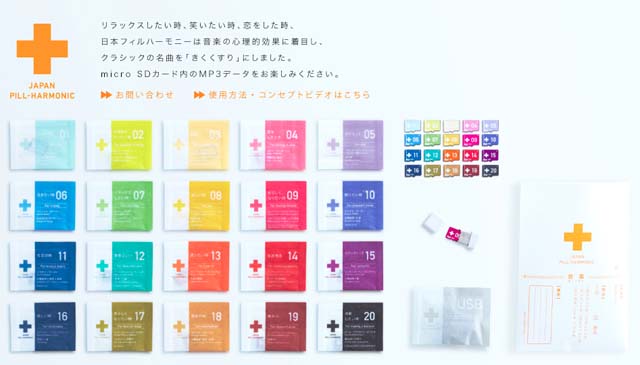 It is probably not only the Japanese Philharmonic which has been distressed for more and more people distance themselves from classical music. When traveling abroad I once went to a classical concert named a “jeans concert” which was apparently meant to appeal to young people to come to the hall without following a traditional dress code but simply enjoy classical music.

This product was born out of such orchestra’s hope to make people understand why the classical music should exist; classical music can be a healing tool. Each package (in above picture) which looks like a drug envelop contains a MP3 datum in a micro SD card. On each package there is a prescription for a symptom such as “for constipation”, “for sleeping difficulty” or “for relaxation”.

The price setting is not yet finalized but “Pill Harmonic” is due to be released in this autumn.