Victory of Nadeshiko Japan Gave Courage to the Country

One of the exciting news every media talks about now is the Japan women’s national foot ball team’s victory in the World Cup 2011.

Japan’s female foot ball team is called by a nickname “Nadeshiko Japan” after a plant, yamato nadeshiko, which is known as fringed pink and also a figure of speech for the beauty of Japanese women who are modest but have inner fortitude. 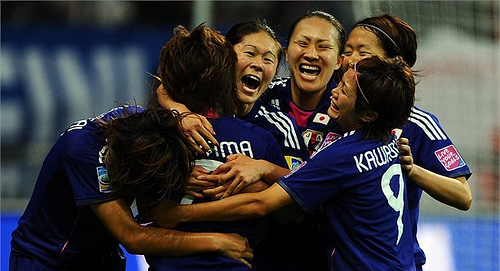 This video shows the penalty shootout in the final; Japan vs. U.S.. It is the moment that Japan defeated U.S. team and won the World Cup.

Although not so many people had been interested in women’s foot ball games before this year’s World Cup, the team’s powerful performances gained a lot of new fans.

According to escala café’s internet survey, 66.8% of women said that Nadeshiko Japan is “interesting” while only 17.5% women were interested in the team last year.

To the question “Do you continue to support Nadeshiko Japan?” 91.2% of the women answered “yes.”

They commented “Their dedication to a sport while working encouraged me as a woman.” “Seeing women making big impact cheers me up.” “Gave courage to my exhausted heart after suffering from the earthquake.”

Hopefully, Nadeshiko Japan makes another victory in the London Olympic in 2012.