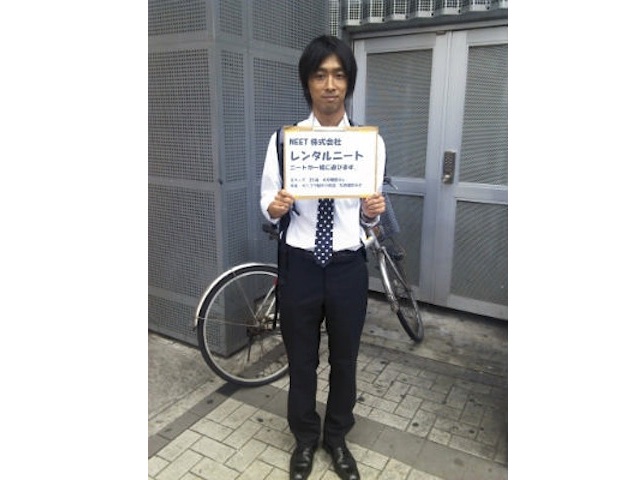 One hot day in June, a man holding a strange sign saying “NEET Rental” appeared in Akihabara, the Tokyo district that is a mecca for otaku people. “NEET” refers to a young person who is “Not in Education, Employment, or Training”(See more about “NEET” >> Wikipedia). This word might not be commonly used in your country, but in Japan the concept of NEET has been a serious social issue for years. The man with the sign is Mr. Naka from a unique business organization named “Neet&Co.” to which many neets belong. In most cases, neets take a strong dislike to be hired and managed by someone else, so here at Neet&Co, everyone is an entrepreneur and there is no heirarchical employer-employee dynamic. Individuals bring their own business ideas together and collaborate to bring these ideas to fruition. This neet rental business is the brainchild of these collaborations.

So how does it work? Well, the Neets realized that their advantageous situation of having more than enough free time would meet the demands of otaku people in Akihabara who are always in need of others to play games with. So, why not hire a Neet? The price is ¥1,000(US$9.8)/hour. Of course, you can ask them for other simple assistance, such as taking photos or guiding around Akihabara. This occasion with Mr. Naka was just a trial run and the business itself might not be a great success. But it seems like Mr. Naka is at least succeeding when it comes to attracting many people’s attention. According to his blog, only a few days after he first appeared in Akihabara, a local TV station asked him to appear as a guest on their talk show! I hope Neet&.Co. will be on track soon, with the neet rental service as a start 🙂