How Far Can We Go Under the Tokyo Station?

Image by The Tetsudo Kaikan

Being in the rainy season, we really appreciate underground passageways because they connect stations, buildings, and complexes, so we can walk from place to place without getting wet.

Firstly, he headed toward the north-side, Otemachi Station, which is a business district. Since it was Sunday, there were not so many people there. Going through main paths, he came to C2b-exit of Otemachi Station, the northernmost exit. It is about 950 meters away from the center of Tokyo Station in a straight line.

Shifting the direction to southwest, he reached A14-exit of Hibiya Station. An oasis in the busy city, Hibiya Park is right in front of it. It is the westernmost point, and about 1,250 meters away from the center of Tokyo Station in a straight line.

The next point is south. He headed toward Higashi-Ginza Station. Ginza was crowded even on Sunday. He got to Exit-6 of the station, and there is the Shinbashi Enbujo before the exit. The southernmost point is about 1,400 meters away from the center of Tokyo Station in a straight line.

Lastly, he walked to find the easternmost point. Going through the Tokyo International Forum in Yuraku-cho and the sideway of Keiyo Line (which takes you to Tokyo Disney Resort) ticket gates in Tokyo Station, he arrived at Yaesu Underground Shopping Complex (known as Yaechika), which is the largest underground shopping complex in Tokyo and always bustling. The Exit-23 of Tokyo Station seems to be the easternmost point. It is about 400 meters away from the center of Tokyo Station in a straight line. 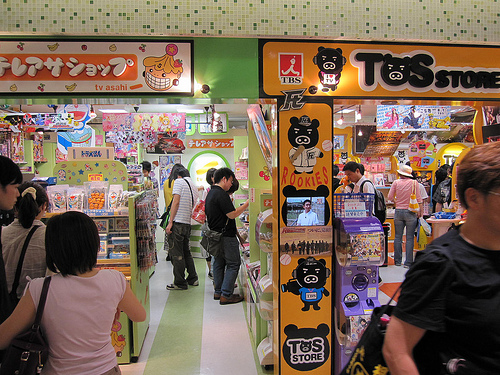 Returning to the start point, he finished the research. He walked for four hours making 16,307 steps according to his pedometer! The underground opening of Tokyo Station was larger than he had expected. It measures 2.5 km from north to south and 1.5 km from east to west.

If you are sicken of rain in Tokyo, now you know where to go. There are restaurants, coffee shops, and various kinds of stores under the Tokyo station. You can enjoy your day without getting wet (^_^)