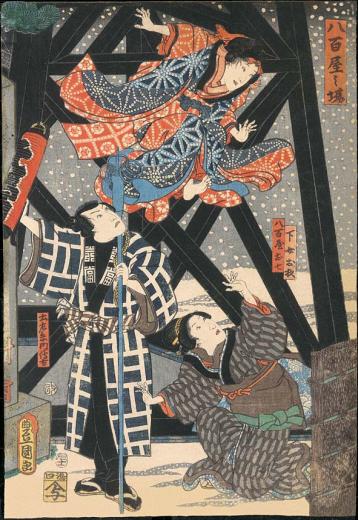 This is a poster resembling the appearance of Kabuki actor at their stage during the Edo period. Drawn by Toyokuni Utagawa 3rd, an Ukiyoe artist famous for Kabuki actor and beautiful woman paintings.

How about this item as one of your collections or posters to put them on the wall?  😉

A disciple of Utagawa Toyokuni the first.  Later, he succeeded the master and became Toyokuni the third.  He was born in Honjo in Edo. His real name was Sumita Shozo.  He learned Ukiyoe under Toyokuni the first and showed his talents in portraits of actors and courtesans in the name of Kunisada.  As his family had a share of the ferry at Itsutsume in Honjo, he renamed himself Gototei.  When he called himself Gototei, he was best reputed and reached his prime, producing portraits of courtesans and actors, which represented the late Edo style, based on the Edo sense of beauty such as “iki” or “hari.” He was one of the most popular Ukiyoe artists in the late Edo period, making the Utagawa school the largest school in the world of Ukiyoe.  He happened to be in the same generation as Sharaku or Hokusai and today his greateness may seem diminished behind their fame, but still his portraits of actors, the most popular in his time, are the richest works in the sense of design in the Edo period. 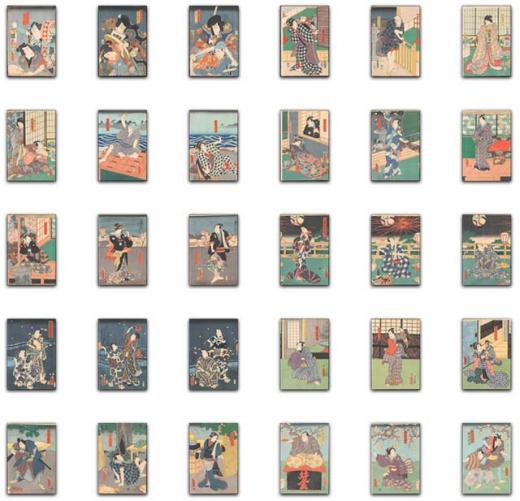 Please look at this beautiful prints and others in our online store under the ukiyo-e category!