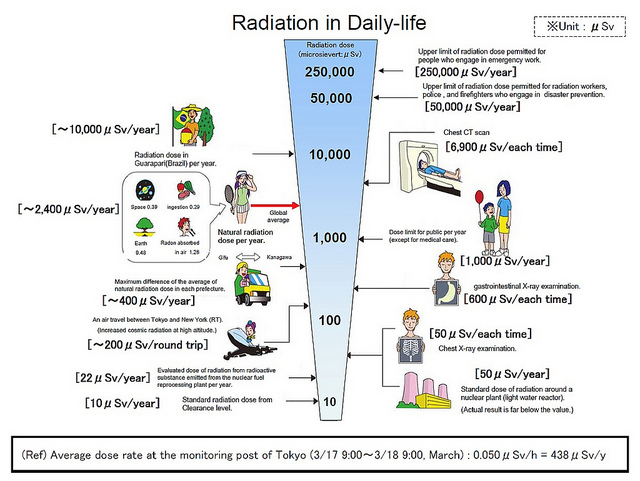 11 days passed since the earthquake, people in the Metropolitan area have been gradually regaining their composure; however, we still have indelible fear toward radiation from damaged nuclear power stations in Fukushima prefecture.
Because of the overzealous coverage, some people were fanned their fear even more, while doctors of science kept saying “Don’t overreact. Seek right knowledge!”

According to Doctor of Science Koji Hashimoto at a Japanese large natural sciences research institute, RIKEN, some Japanese scientists including him translated a slide which Assistant Professor Benjamin Monreal, UCSB Department of Physics, explaining the nuclear power station’s situation and radioactivity with simple words, and they released it online to get rid of fear from residents in Japan. It was downloaded 200 thousands within 24 hours, he tweeted on Twitter.

You can see the original from “How Bad is the Reactor Meltdown in Japan? by Benjamin Monreal, UCSB (http://online.itp.ucsb.edu/online/plecture/bmonreal11/).”

Introduction: “Assistant Professor Benjamin Monreal, UCSB Department of Physics, will give an overview of radioactivity and reactors, radiation health and safety, and the ultimate fate of the materials coming out of the stricken reactors in Fukushima.
Why is it worse than Three Mile Island? Why is it (probably) not as bad as Chernobyl? How worried are scientists? How worried should you be?”

If you want to know radiation level in around Tokyo, some Geiger counter (radiation detector) owners broadcast live on Ustream. This is the list of the channels.

Most of them are voluntarily sharing the information. The numbers shown may not be true; therefore, please take it as reference, and know that there might be some channels that were canceled already.

Japan’s Ministry of Education, Culture, Sports, Science and Technology detect and open the radiation levels of 47 prefectures of Japan. It shows 0.147μSv/hour in Shinjuku, Tokyo between 6 to 7am on March 23. What does the number mean? Please see the diagram “Radiation in Daily-life” above.