Recently, jogging has been capturing the heart of Japanese people as a healthily activity. Today’s article introduces a unique marathon of Japan. 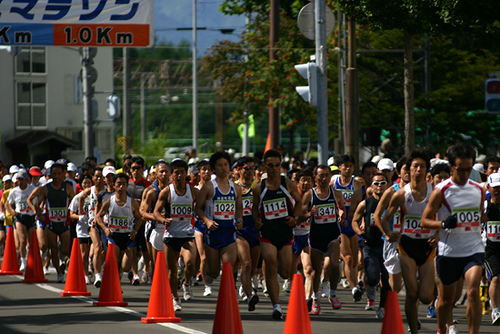 Jogging has been very popular in Japan, and it has often been featured in magazines and TV programmes.  Its popularity can also be proved by the fact that ‘Tokyo Marathon 2012,’ to be held at the end of February, attracted 9.6 times as many people as its capacity!

Such Japanese passion for jogging no longer just remains in Japan, and more and more people have been heading overseas including New York and Honolulu for marathon.  So energetic, aren’t they?? w(*o*)w

When you start something you like, you will be motivated to master the heart of it.  Now, it seems rather more unique marathons are appealing to those who have already conquered some normal marathons.  One of such unique ones is a hardcore marathon to run steep mountain for a longer distance than full marathon…

Full marathon already sounds hard enough, so I don’t even want to imagine how tough it will be… (-_-;)

According to the article, the strenuous marathon is called the Fuiji Mountain Marathon of Yamanashi prefecture.  Starting at a city hall, contestants aim to head off to their goal at an altitude of about 3,711m within 4hrs 30mins.  As it does have mount climbing elements, there will be some rough areas with bumps and steps as well as difference in oxygen concentration.  Unlike normal marathons, less than 50% of contestants complete the full distance, which well explains how hard it is….

On the other hand, not all unique marathons are equally tough, and some provide you nice local food including alcoholic drink and steak at their aid stations.  Such nice food-involved marathons are widely available in Japanese; events in Tokyo, Kanagawa and Aichi prefectures are offering sweets, and one in Shizuoka even offer Koshihikari rice on all-you-can-eat basis.

I don’t think people would just go through all the tough time for food after the run lol, but it would be a very good idea to try keeping yourself healthy for the event and enjoy some nice food after running:-)

If there is any interesting marathon in your country, please let us know.  I’m looking forward to hearing from you♪