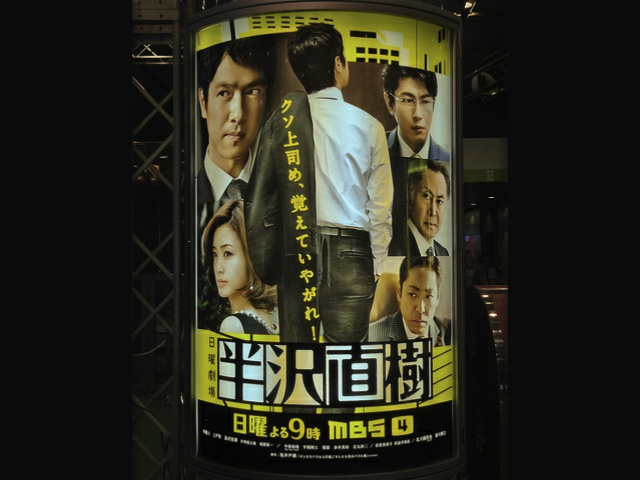 The other day I wrote about a very popular TV drama, “Amachan”. This season there was another top-rated TV drama whose viewer ratings hit over 30 percent many times. The title is “Hanzawa Naoki”. Hanzawa, the main character, works as a finance department manager at a major bank. His career at the bank is full of conflicts and troubles, but he keeps tackling the difficulties and solves them one after another in extraordinary ways. On the surface he looks like an ambitious and competent man. However, his secret final purpose at the bank is actually avenging his father’s death! (His father, who ran a small factory, killed himself because of the bank’s unreasonable decision…)

I personally don’t like TV dramas full of complicated technical terms (they distract me from the story itself!) Characters that appear in this drama use a lot of special finance terminology I have never heard of. But still, I enjoy this drama a lot because the story is very sharply drawn, and those terms are clearly and succinctly explained.

It is said that one reason why Hanzawa Naoki attracts the audience so much is that the story develops in a similar way as do Japanese classic samurai dramas called jidai-geki. In those samurai stories, the identities of good people and bad people are quite obvious, and justice always wins. The main character beats evil magistrates every time. Hanzawa also faces evil (his wicked bosses), struggles with obstacles and overcomes them at the end. I would say he displays outstanding samurai spirit. Hanzawa is broadcast Sunday nights; a time when many people are blue because Monday morning is just around the corner. But Hanzawa never leaves the audience feeling gloomy. Rather, it refreshes people before a new week starts!

Here is a popular signature phrase of Hanzawa. He shouts this at the climax of each episode.

“Yararetara yarikaesu! Bai gaeshi da!!” (An eye for an eye! I will just fight back twice as much!!”)

This is another something in common between Hanzawa and samurai dramas. Each jidai-geki usually has its own signature phrase, uttered by the main character in the most dramatic moment of an episode.

If you have a chance to fight against big evil powers at work, please try his phrase yourself! Luckily (or unluckily?), situations that deserve this phrase rarely exist in our actual lives. 😉