It is a local character “Ecoha-chan,” made by Ube city, Yamaguchi Prefecture to promote eco activities.

And this is Pikachu. 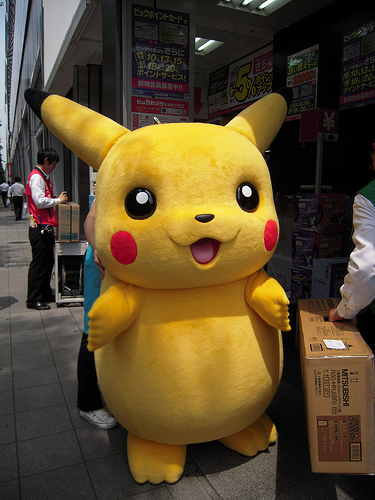 Big black eyes, pink cheeks, and cat like mouth… they look like twins! 😯 The colors are different though. Ecoha-chan is green probably because she is Eco + ha (leaf).

But when you compare the original picture and the costume, they don’t look exactly the same. There is a possibility that it got closer to Pikachu when they made the costume from the original.

Although the city denied copying the super popular character, they apologized for confusion. The city has contacted with the Pokemon Company which has the copyright on Pikachu, and planned to have a meeting.

Ecoha-chan is too cute to be banished. Hopefully, it gets settled amicably.