How Did the Metropolitans’ Life Change after the Earthquake? – A Survey Result – Part2

This is the continuation of yesterday’s article about “Survey on Metropolitan Residents Attitude toward Life and Consumption (after the massive earthquake).” To read the part 1, click HERE.

[About Buying and Stocking Up]

After the earthquake, panic-buying was an issue for a while. Articles such as foods and water disappeared from shelves of stores.

To the question “what triggered you to buy up?,” 62% of people answered “because of the shortage of goods at stores,” which tells that empty shelves made people nervous. The sources that influenced on buying up were “television (45%)” and “friends and neighbors (21%).” 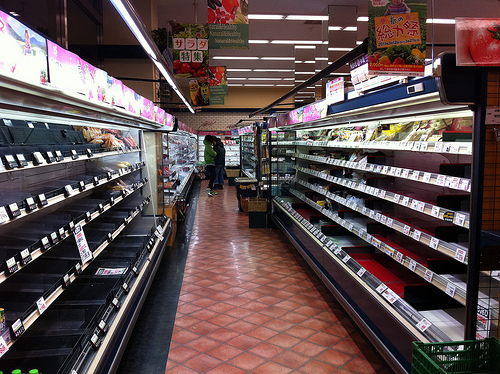 A photo of the supermarket just after the quake (goods are NOT in short supply now)."Koji Horaguchi" some rights reserved. flickr

[What do you keep in mind after the earthquake?]

About 1 person out of 5 people “checks the producing areas of perishable foods,” “tries to not go out,” or “reduces the use of car.” It suggests that consumers are getting unmotivated after the earthquake.

[Intention toward Lifestyle and Value]

The earthquake gave us a chance to seriously think about our life and future. The inconvenient life will last for a while but saving electricity and water is good for the Earth environment anyway. Although it is a very tough time, it is important for us to stay positive and appreciate what we have now.