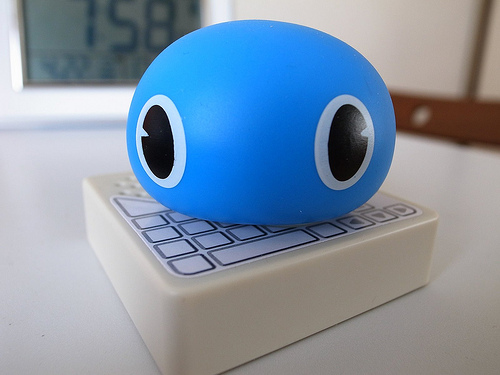 This adorable creature is a Twitter reading robot, Twimal. It was released by a Japanese toy company, Takara Tomy on March 31, 2011.

Twimal plugs into a pc via USB and reads tweets including the user’s tweets, and the selected users’ tweets. The name Twimal is short for “Twitter Animal,” and there are two variations; blue one is a boy named Forou (Follow), and white one is a girl named “Foromi (Follow me).”

You can see how they talk in this video.

Although they sometimes pronounce strangely, their reading is pretty recognizable overall. You can adjust each use’s voice, and choose whether you prefer it to read hash tags, URL, RT original and so on. According to the instruction, Twimal can only speak in Japanese (I hope that the company release English version too).