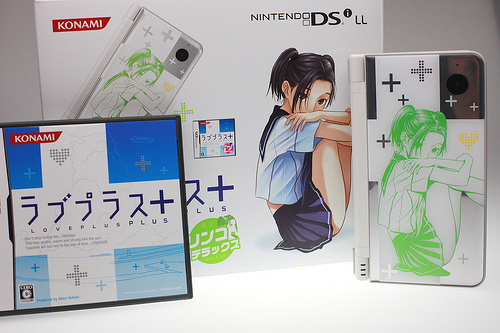 The point of this game is to be a steady with a character and keep the relationship just like you do in real life. Because it is a real-time game, if a player neglects her for a while, she gets upset, so the player has to make contact with her as much as possible. If a player made a date with the virtual girlfriend, he has to turn on his Nintendo DS on the time and goes out with her in the game. As the relationship lasts longer, the girl changes her fashion, look, and personality as the player like

Many users take their virtual girlfriends to wherever they go and communicate with them through text and phone call in the game. It even causes problem to real relationships as the users girlfriends and wives get upset because their men are so into digital girlfriend.

Last week, Love Plus Visa Card was released by Mitsui Sumitomo Card. On the card, the girls in the game are printed.

One thought on ““Love Plus” Real Time Dating Simulation Game”