Curse of the Colonel Sanders 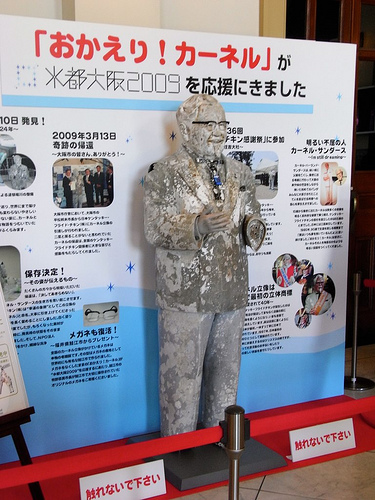 The other day I shared pictures of “KFC’s Colonel Sanders’ Statues in Costumes,” and there was a picture of him in Hanshin Tigers’ uniform. But why is he wearing a baseball team uniform? It is related to “Curse of the Colonel,” a Japanese urban legend.

In 1985, when the Kansai based baseball team, Hanshin Tigers won the victory in Japan Series, the devoted fans went wild and threw a Colonel statue standing in front of a KFC restaurant into the Dotonbori River after lifting it high in celebration.

Since the victory, Hanshin Tigers has never won in Japan Series; therefore, some fans started calling it “Curse of the Colonel.” The statue was still in the bottom of the river, even after several attempts of searching.

In March 2009, the Colonel statue was finally discovered in the Dotonbori River by an obstacle detection team committed by the city. It was found only 200 meters downstream from the thrown point. The picture above is the found Colonel statue. He was missing his left hand and glasses.

And this is close up picture. He is wearing a amulet 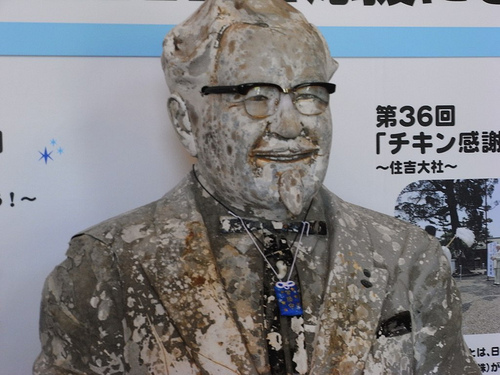 In June 2009, the Colonel statue visited a Shrine to get purification with KFC Japan’s president, who said to the press that they can lend the statue to the Hanshin Tigers’ fans to lift it for celebration when the team won the victory again, but they mustn’t throw it into a river.

One thought on “Curse of the Colonel Sanders”